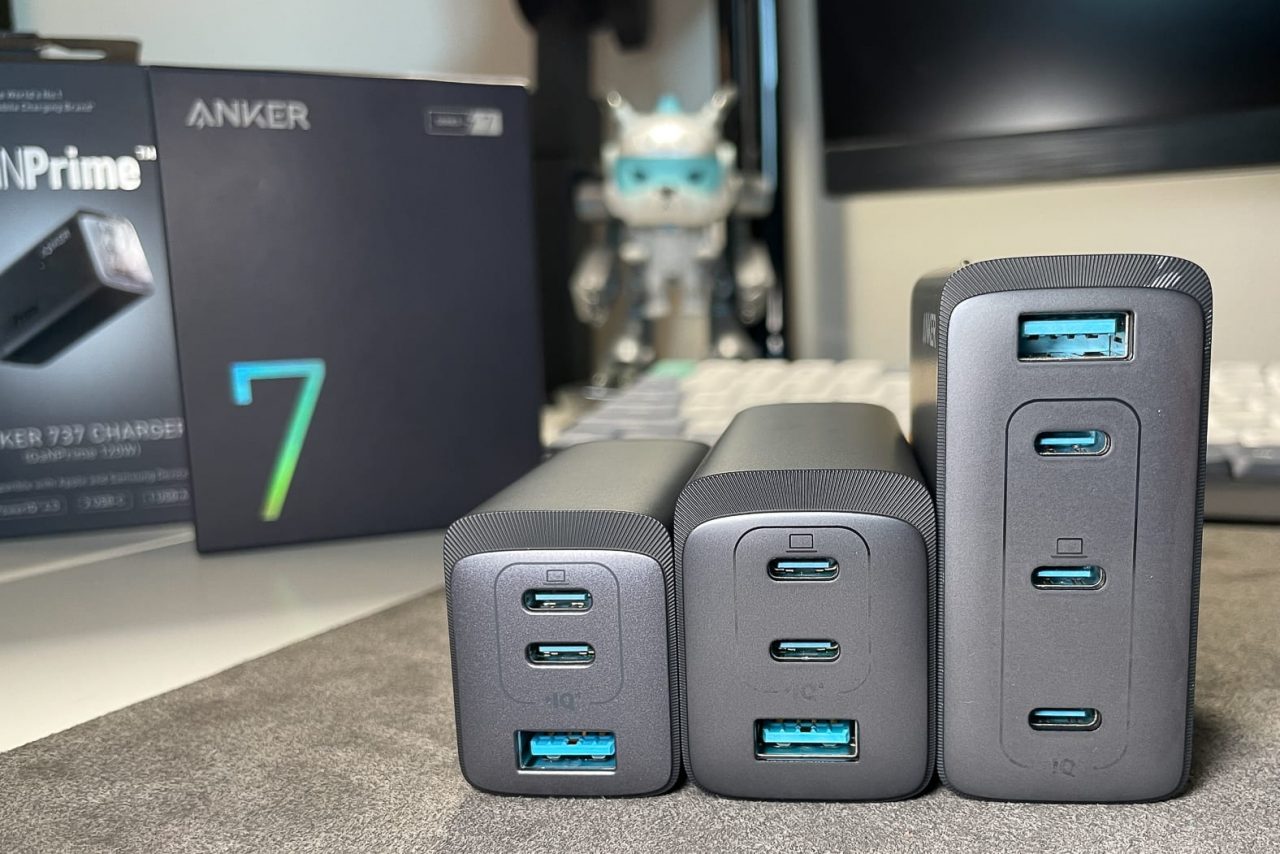 The Anker Series 7 GaNPrime Power Adapters have a sleek design that is portable and they are very easy to use. The price is competitive with other similar products, but it is slightly higher based on the newer technology included.

I’m always up for adding more charging devices to my collection of chargers and when I heard that Anker, who I’ve been a fan of for a while was releasing some ‘next generation’ power adapters, I knew I wanted to jump on that.

While the product lineup includes a variety of power devices, I really wanted to dig into the power adapters. There are three in particular that caught my eye – the Anker 735, Anker 737, and Anker 747 chargers. Each charger provides a higher power output than standard power adapters I’ve worked with in the past. I have outlined my experiences with each below, but first, let’s look at the specs.

First of all, I want to point out that Anker named the products so that they actually help to describe the product. This makes it easier for the user to choose the product based on their specific needs.

For example, let’s say I needed a power adapter that would charge at least 3 devices simultaneously. I would pick out the 737 because the first number indicates the series the product is a part of, the second number points out how many items you can charge at once and the final number indicates the tech performance or the output wattage capacity. So, with the 737 I know I’m getting a Series 7 product that can charge 3 products at once, and it will provide at least 100W of output charge.

I think that’s a pretty unique way to organize the different items in the product families. It certainly does make it easy for the user.

These chargers are equipped with multiple ports to accommodate a variety of products simultaneously. Some of the products that could be charged with these power adapters include laptops, smartphones, smart watches, tablets, etc.

These chargers are designed to rival the size and shape of native power adapters. Anker wanted them to provide more power with a smaller, more compact form. The 735 and 737 chargers have a similar shape with the 737 only being about 0.5” longer than the 735. The 747 measures 2.25” x 2.5” which is approximately the same width of an AirPods Pro charging case.

Each of these chargers has the ability to charge a device faster than a standard charger.

PowerIQ is Anker’s own proprietary technology that allows the chargers to recognize the devices it is charging and dispense the maximum amount of power they can receive to ensure the fastest charge. The GaNPrime chargers feature PowerIQ 4.0 which includes Dynamic Power Allocation which intelligently prioritizes the connected device with the lowest battery level.

With the Dynamic Power Allocation feature, power distribution is adjusted every 3 minutes, releasing any extra power output to the other devices being charged. The example the Anker provides is: When simultaneously charging two 67W MacBook Pro 14“ our new GaNPrime™ charger will reduce the total charging time by 62 minutes.”

ActiveShield provides added protection by intelligently monitoring temperature and adjusting power output to safeguard your connected devices. The GaNPrime chargers monitor temperatures 3 million times per day and they have an increased temperature detection frequency of 75% compared to previous generations.

Efficiency is measured by the amount of electricity wasted by the charger in the conversion of AC to DC. On average, the GaNPrime chargers are approximately 2% more efficient than previous Anker GaN power adapters.

Additionally, the latest GaN chargers can cut carbon emissions by up to 30%. According to Anker, “If every person in the U.S. used our new 150W GaNPrime charger for a year. The power it saved could power all of Hawaii for 1 month.”

Most of the Series 7 GaNPrime chargers are available in the U.S. starting today (July 25, 2022). The price points and details are listed below for each of the chargers mentioned in this article.

Each charger is set to release with three color variations – black/grey, champagne/gold, and white/silver.

Each of the chargers comes in a stylized black box ‘Series 7’ on the side of the box and an image on the front of the box. The Anker 735’s box is a little different. It’s an all-black box with no imagery included. The back of the box has some details included but there really isn’t a lot of information about the product on the box.

When you open the chargers’ boxes you’ll find the charger, its manual, and the charger’s wall plate accessory. Both the power adapter and the wall plate are wrapped in plastic. The manual is multilingual and but all the languages are all mixed up together instead of there being different sections for different languages.

The wall plate has a soft feel to it. It’s exclusive-feeling but I’ve found that finishes like this often collect a lot of dust. The accessory is designed to provide additional support for the power adapter so that it doesn’t fall out of the wall outlet while plugged in. The two pieces fit together easily — as long as the prongs are not folded up.

When reviewing a charger, I typically charge a device or two with it to see how well it charges. I will note the device’s battery level at the time I start charging it and then charge it for 30 minutes. Every 10 minutes during that charging session, I will record the charger’s progress and then I will take the total amount of battery charge gained and divide that by 30 to see how much of a percentage was gained per minute to get the charging rate.

The laptops were not in active use while the charging test was taking place, but I did use a utility app to keep both from going to sleep during that time. I also had both laptops plugged into the same power strip. I used USB-C to USB-C cables from Apple and Anker to connect the devices to the chargers. I found that the charging rates were typically above the average I’ve seen with their standard chargers.

In addition to the performance test, I also wanted to make note of a couple of the physical characteristics of the products in use. For example, how well the wall plates worked and the temperature of the products after they charged their respective devices. The suction cups on the wall plates worked really well. They were very strong and I was actually concerned that maybe they would pull the outlet plate away from the wall. When I removed the suction plate from the outlet plate, I sort of wiggled it a little to loosen it up before pulling it away.

While the chargers were actively working to power the connected devices, I checked their temperatures using an infrared thermometer. When the first 10-minute battery check came up, I noticed that the 747 was very warm to the touch. So, I started checking each of the chargers when I checked their charging progress.

Chargers do tend to heat up a bit when they are transferring power from a wall outlet to a device because there is a conversion of power happening. According to myelearningworld.com, a “device will begin to heat up because the wall voltage is somewhere between 110 to 220 volts, while the cellular device is only 5 volts. This causes the laptop or cell phone charger to do a lot of work which generates quite a bit of heat.”

I’ve tried to find a definitive answer about “how hot is too hot” for a charger, but the only answer I’ve found was also with myelearningworld.com. The same article states that while some heat is normal, if the temperature exceeds 50ºC or 122ºF, then that’s too hot. Chargers that run hotter will also typically not have as long of a life span as those that do not. So, the temperatures I read from the Anker Series 7 chargers were within a safe range.

The Series 7 GaNPrime Power Adapters are powerful chargers that can provide power for just about any modern device available. They are compact and based on their power outputs, quite affordable in comparison to other models that don’t have the same level of GaN technology that the Series 7 chargers have.

I like the addition of the wall suction cups because I think that helps to secure the larger chargers while they have devices attached. I’m very glad that the prongs fold into the charger because it makes them more portable in my opinion.