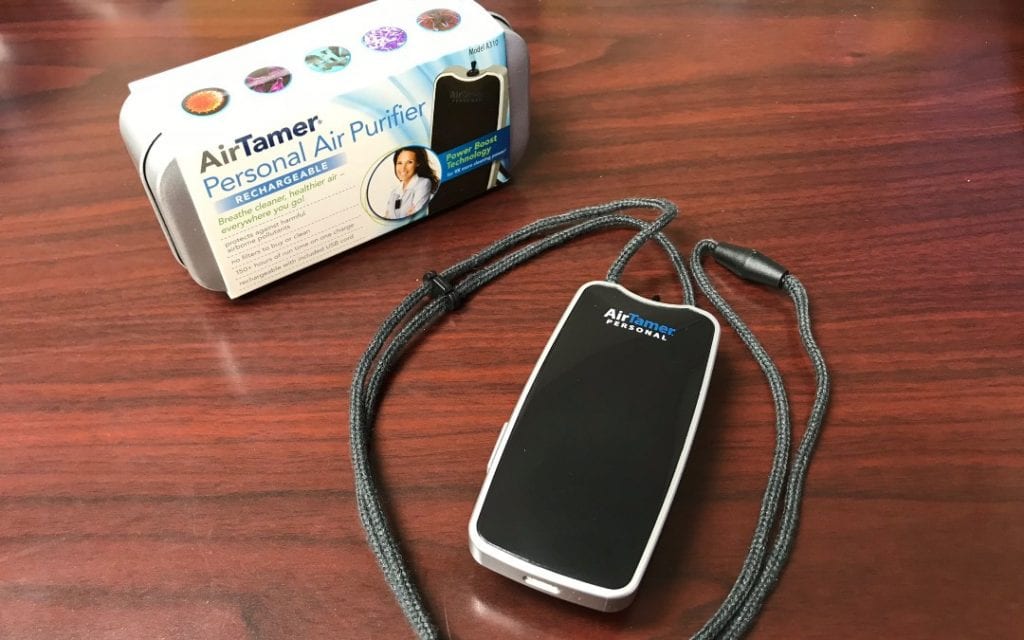 Creates a sphere of clean air around you.

The past couple of years I’ve ventured out west to the Consumer Electronics Show (CES) in Las Vegas. It’s a wonderland of technology gadgets…and germs. You can do everything possible to prevent the spread of illness in that situation, but no amount of Vitamin C tablets or hand sanitizer can stop airborne germs from getting to you. As I prepare to make the annual pilgrimage to CES in about a month, I started looking into alternative methods to keep myself well and I came across the AirTamer Personal Air Purifier.

The AirTamer is a personal, rechargeable air purifier. It’s produced by an innovative manufacturer, FilterStream, and said to be the world’s most effective personal air purifier. The device works by emitting a constant stream of healthy negative ions. Those ions force airborne pollutants away from your space creating a ‘safe zone’ of cleaner, healthier air. The specs of the AirTamer state that it will produce a 3-foot sphere of clean air around your head. The ‘clean’ air will be rid of atomic sized pollutants like viruses, pollen, smoke, molds and dust mites. Traditional HEPA filters leave these behind and AirTamer emits over 2 million negative ions per cubic centimeter every second. This is 9 times stronger than any other personal air purifier in the world. 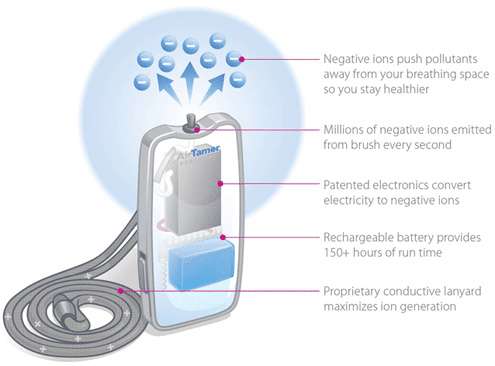 The AirTamer is a small box about the size of a pack of gum and it hangs from your neck on a provided lanyard. It operates with a simple flip of a switch and charges using a Micro USB cable. It’s silent and honestly, there were several times I didn’t even think it was turned on. The only indication was the power LED light on the underside of the unit. AirTamer’s technology is energy-efficient and will operate for 150+ hours on one charge. There are no filters to clean or replace and it comes with a metal travel case for safe keeping.

When I got the AirTamer, I really wasn’t sure how to test whether or not it was working. AirTamer’s website suggests placing the AirTamer brush near your lips as the negative ions will ‘tickle’ them as they are emitted into the air. I did try this and found that it felt like a lot of tiny shocks were hitting my lip. You don’t really get the same sensation if you tap your finger to it because the skin on your fingertips is thicker than your lips. 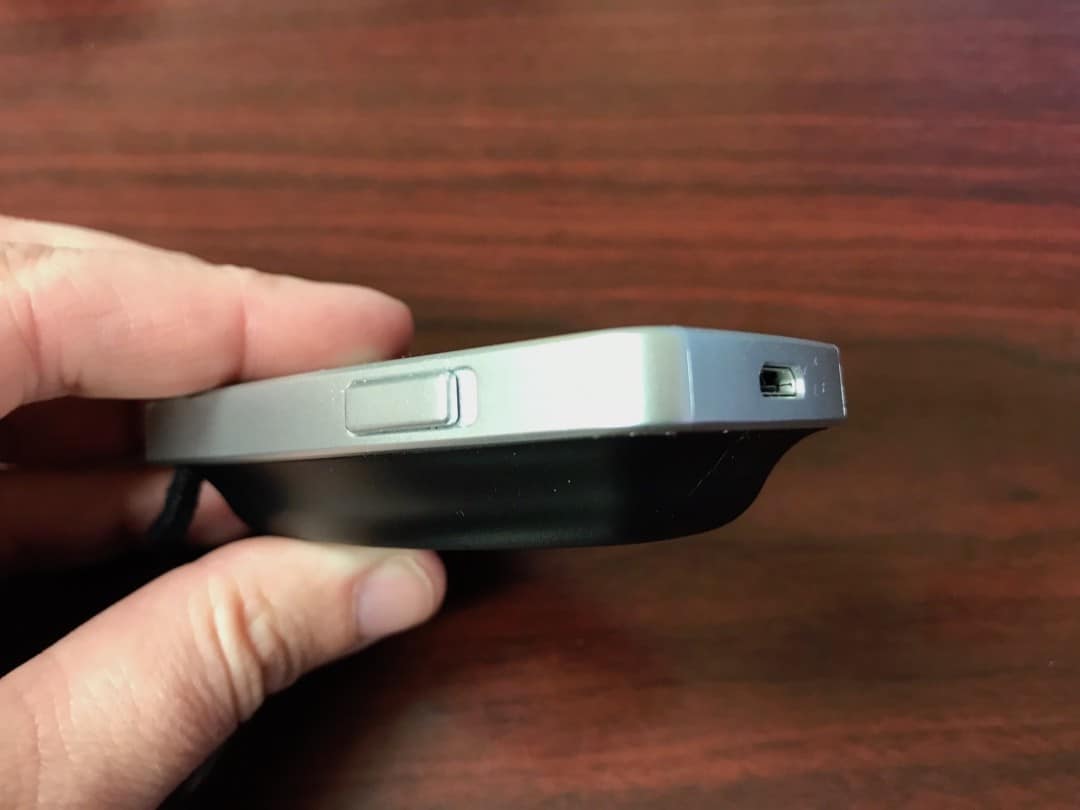 Now as for field testing this tiny device, I wore it around my neck for several days. Unfortunately, I am typically in a mostly clean environment. I had trouble telling if the air around me seemed cleaner or not and I didn’t have any type of sensor to help determine air purity either. I did, however, have a cool mist humidifier/diffuser at my disposal. So, I found a glass container and put the AirTamer inside with it turned on. I let the humidifier fill it with water vapor. For about 15-20 seconds I was surprised to see all the vapor dissipate. As the vapor cloud would move closer to the brush end of the AirTamer, I would see it be pushed away from the device. As a control, I did the same experiment with no AirTamer and while there was less vapor present than what I put in the container, there was still more than the AirTamer container. 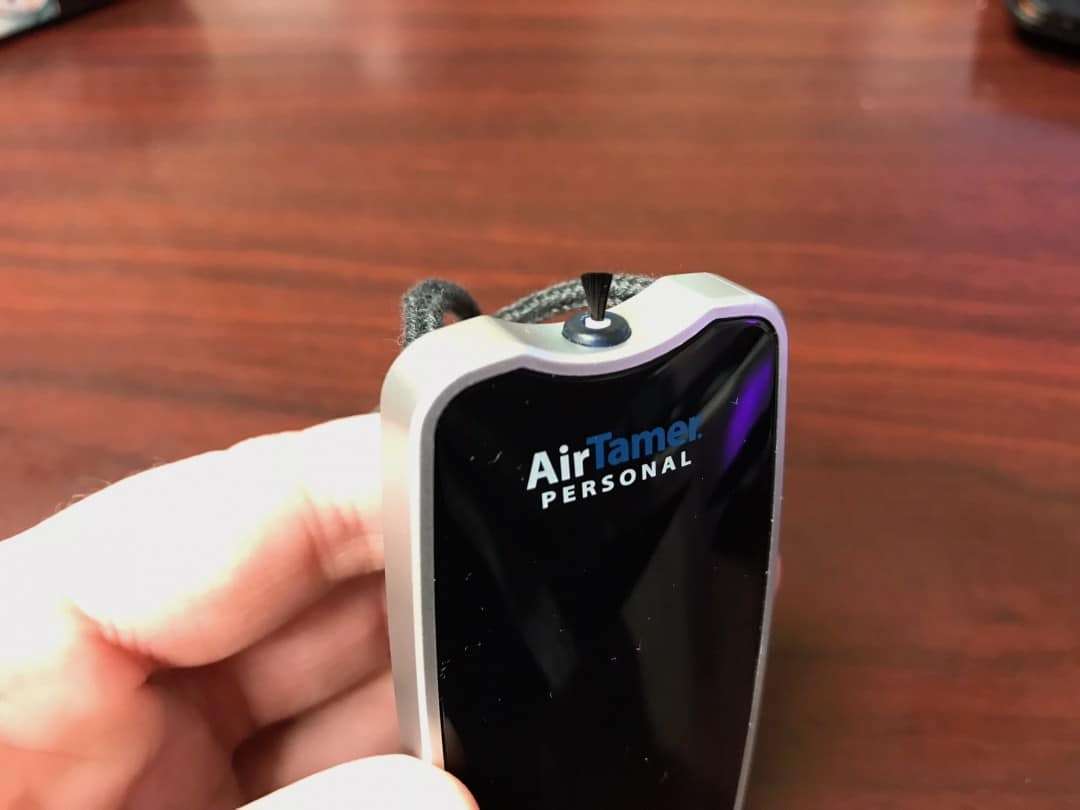 I can’t say for certain that the AirTamer actually kept me healthier while I was testing it, but I am convinced that it pushes air particles away from it. The ultimate test will be in a little over a month when I have to brave two airplane rides and a sea of thousands of people for a week. If I end up not getting sick this year, I can say that AirTamer played a part in that. It’s a handy little device that easy to carry around with you.
BUY FROM AMAZON