Take selfies from up above without the use of a pole.

A couple of years ago, selfie sticks became very popular. As a technology reviewer, I saw my fair share of them. Most of the ones I came across were nothing to write home about. They were a telescoping pole with a phone mount on the end of it. As simple as they are, Selfie Sticks still serve a purpose. They allow us to take portraits with friends and family in groups when our arms just aren’t long enough. So, what do you do when your family or friend group is just too big for a selfie stick? My natural response would be to turn to a drone, but most are simply overkill for a simple still photo. A device that is ideal for this very situation is AirSelfie.

AirSelfie is a mini-drone that is designed to take still photos from above. I’ve had the opportunity to try out several different types of drones, but not a minuscule one like AirSelfie. The idea behind this device is simple: it’s a flying camera mixed with a phone case. The only kicker is that your phone never actually fits in the drone. The camera is self-contained in the drone and controlled by your smartphone, which stays safely in your hands. 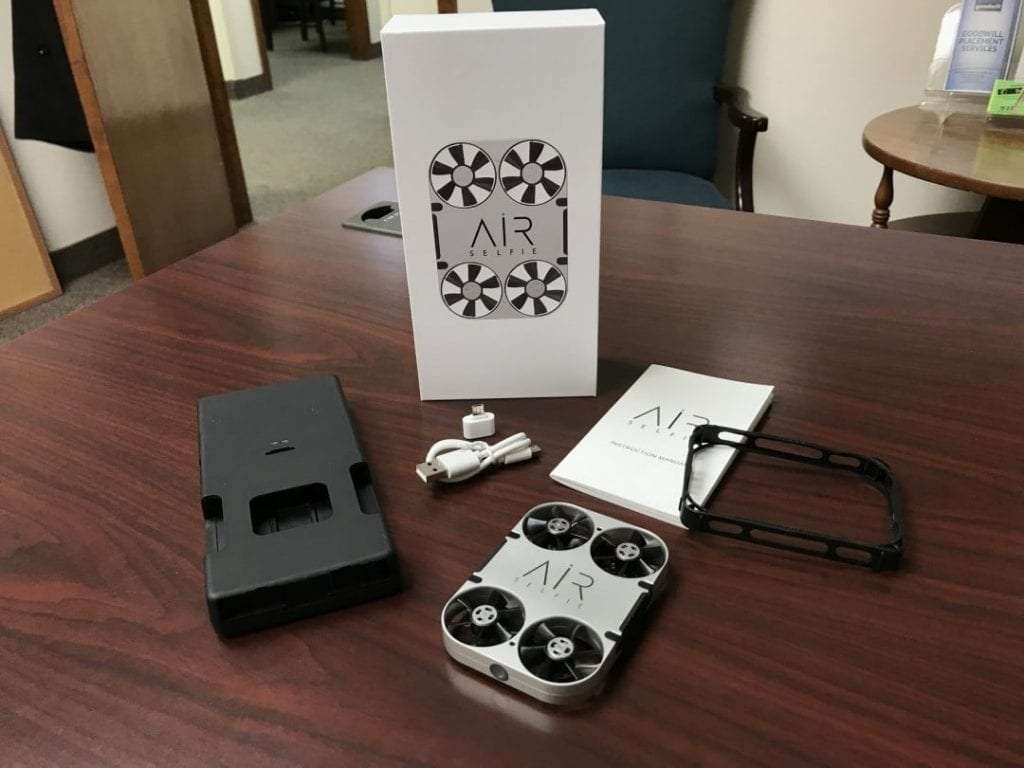 Tech Specs
The most impressive spec about the AirSelfie is its weight. It only weighs 61 grams. That is a fraction of what my iPhone X weighs (174 grams). The case of the drone is constructed out of aeronautical-grade anodized aluminum and it’s small enough to fit in your pocket. There are four turbofan propellers that can send the drone more than 65 feet in the air. The propellers are powered by brushless motors and its safe to grab while it’s hovering. The camera is a 5MP HD camera and the drone automatically generates a 2.4GHz WiFi network that you connect to with your phone. AirSelfie has a lot of great design features and it’s really a great concept in motion.

Unboxing and Set-up
AirSelfie comes in a nice, branded heavyweight box. It has a cool portable charging case that the drone slides into when needing a charge, a USB cable, a rubber bumper, a USB to micro USB adapter, and instruction booklet. I was impressed with the accessories that were included with the AirSelfie. 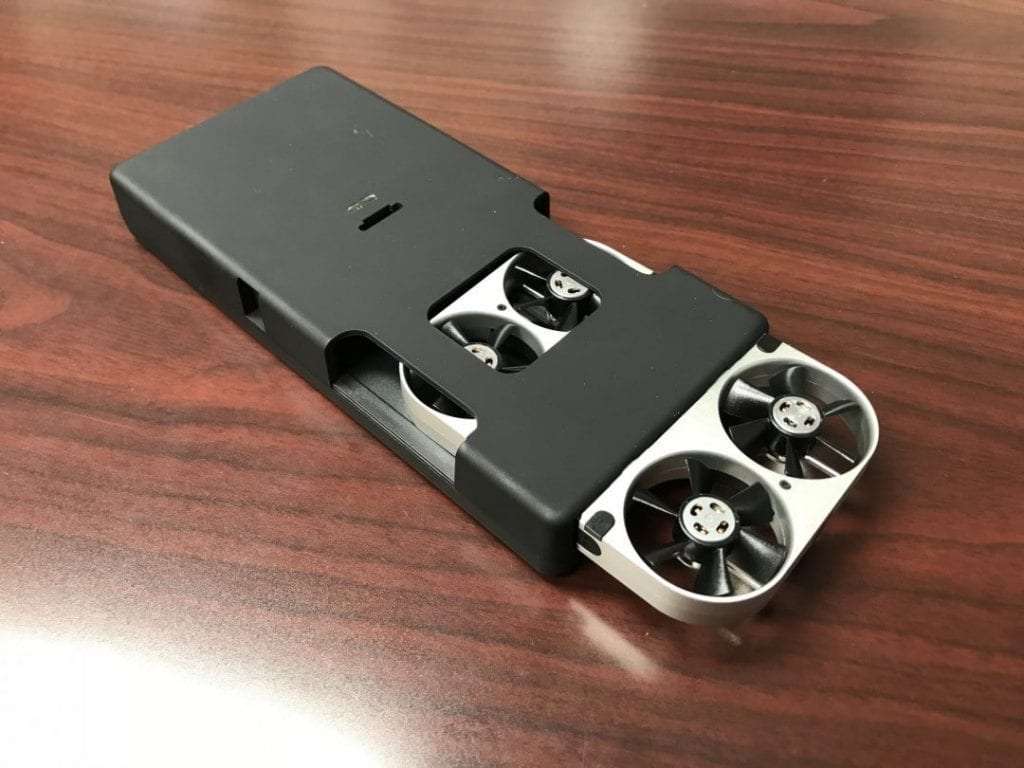 User Experience
I love the concept of AirSelfie. To think that when you are on a family vacation on a beach, that you could easily toss the AirSelfie in the air and grab a quick shot with the landscape in all its beauty, it’s an amazing concept. Unfortunately, my experiences with the tiny drone weren’t all they were cracked up to be. My first attempt at capturing a photo with AirSelfie was indoors. I was so eager to try it out that after I got it out of the box and connected to it, that I launched the drone and snapped a couple of photos. They came out blurry and I noticed that the AirSelfie wouldn’t hover in one place steadily.

Knowing that lighting can have a lot to do with focus and noise in photographs, I decided to try taking photos again with it, but this time, I went outdoors. So, on a nice sunny day, I went outside and shot a few more pictures. I will say I have tried it in a few different areas and have had the same outcome each time.

Honestly, it reminded me of a photo that would have been taken with a flip phone from the early 2000s. I know that’s incredibly harsh. I hate being harsh on products that I want to see be awesome but as cool as it would be to have a drone this size to get some awesome photos of me and my friends or cool locations, having a drone this size that is taking such horrible quality photos seems hardly worth the time it takes to say smile and say cheese.

When I kept getting blurry, noisy photos and I had tried everything I could think of to improve the quality, I thought that maybe it was the fact that it’s a 5MP camera. My iPhone X has a 12MP camera, so dropping down to 5MP is kind of a significant drop from what I am used to. Not too long ago, I went through some Firmware updates and even though I saw a lot of improvements to functionality with those upgrades, it wasn’t enough to say, “Gosh, this camera is awesome.” 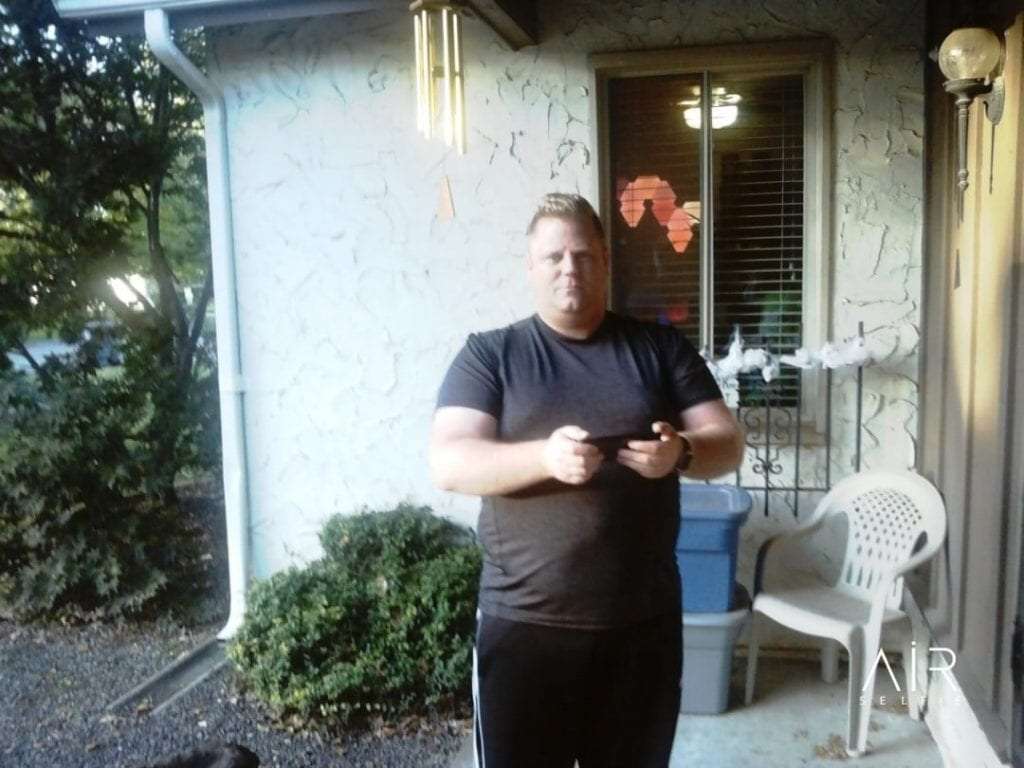 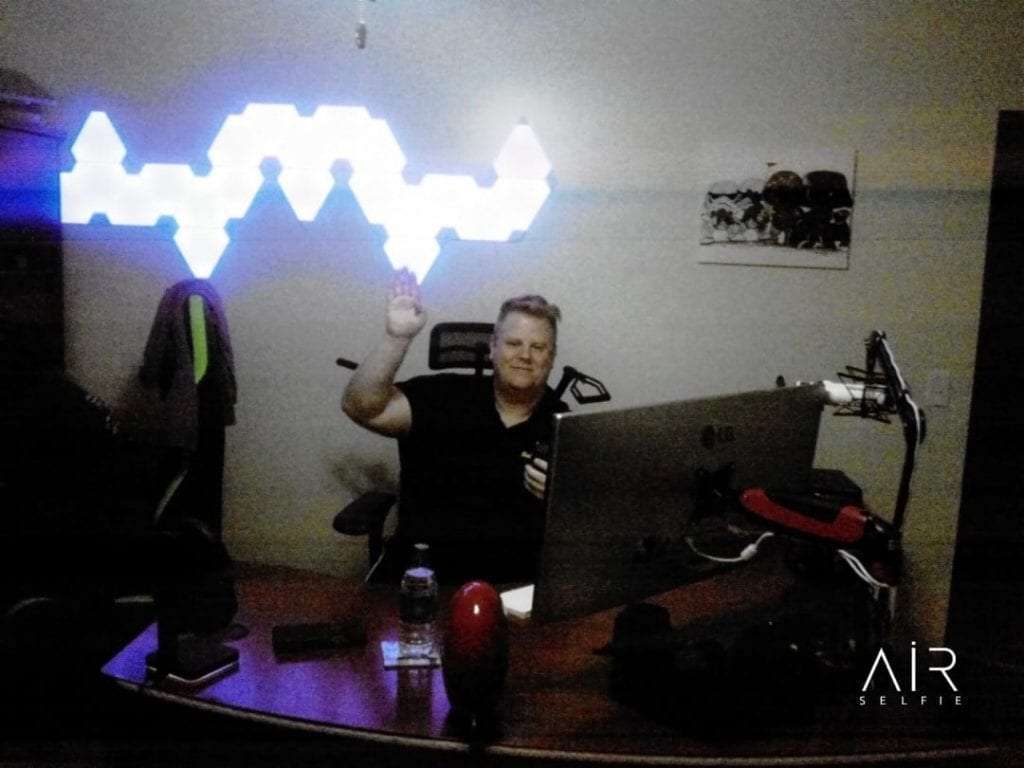 Conclusions
I truly believe the team at Air Selfie has the right idea and will make this little drone a reality. I have been testing this Gen 1 AirSelfie and just this past week, AirSelfie announced their second generation model details at CES. According to the information released AirSelfie does feature an enhanced camera, longer battery life, and greater memory. It has a 12MP camera, just like the iPhone X. The second generation AirSelfie will be available in March for $300 and comes in four colors – silver, black, gold, and rose gold. I have seen some positive reviews on the AirSelfie so I hope I can chalk my bad experience up due to a defective unit. I see room for improvement, but for now, I would hold off on picking one of these up and wait for the AirSelfie 2.
BUY FROM AMAZON